Eighty-five percent of Americans are deficient in Magnesium and don't even know it. For athletes, the rate is even higher.

You may think you're immune to this common deficiency because you eat a banana every day. But think again. You're have to consume 9 bananas each day just to meet the Recommended Daily Requirement (RDA) for magnesium for the "average American" (meaning sedentary and overweight). Any type of athletic endeavor requires more.

You might ask, "If I'm deficient and don't even know it why is it a big deal?" 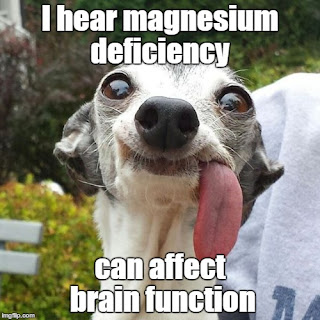 Why are so many of us deficient in magnesium?

The RDA for men is only 420 mg/day and 310 mg/day for women. Any kind of strenuous exercise increase the need for magnesium by as much as 20%.

Your doctor can check your level of magnesium and other minerals with a simple fasted blood test.

If you are deficient, as 80-85% of Americans are, you're probably going to have to supplement you diet. If you do, purchase a good brand and choose the chelated form rather than the oxide form.