I hear this excuse all the time. And that's all it is, an excuse. 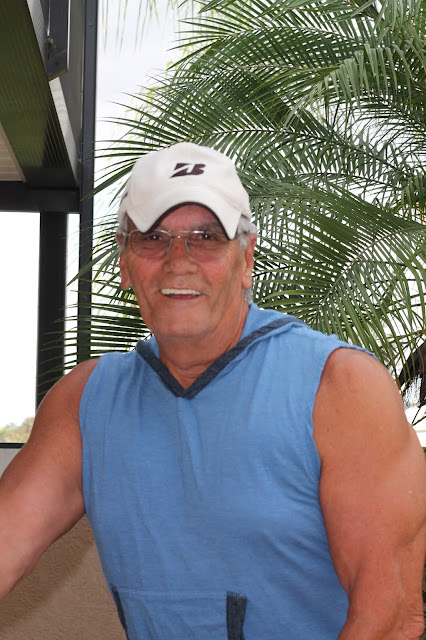 I touched on this in an article back in 2015 and republished it as one of the most read articles over the last two years. You can read it here Your Excuse is Invalid .You should read it or re-read it just to get a better understanding of my history.Also read this article Bodybuilding or Fat Loss for Seniors

The fact is, we all get older (hopefully) and our body and abilities change. It happens at different ages for different people and different activities. We get a step slower, build muscle slower, lose fat slower. The oldest three professional football players are 43, 42 and 41. And they are all kickers. Tail backs, wide receivers and quarterbacks usually have a much shorter career. Golfers, on the other hand can play considerably longer.

My son and a friend were playing golf and the starter paired them with a husband and wife in their late 70’s. The older couple couldn’t hit it far but every shot was straight. They always hit the green and always two-putted. They were smart and adjusted to their abilities. They shot two over par for the 18 holes.

You have three choices. You can mourn. You can surrender. Or you can define a new plan.

But go to the article linked above and look at my history (including my injuries and ailments). I’m now 67 years old. But the fact is, I was at my strongest when I was 50 years old. My personal records in the dead lift and squat were set on my 50th birthday.

Am I special? Hell no.

Then how did I lift more at 50 than I did in my twenties? I got smarter and wiser, at least as it applies to fitness. (In other areas, maybe not so much). I love the saying; “If you were never young and foolish you’ll never be old and wise.”

In my twenties and thirties I worked hard at everything I did. I had enough work ethic to offset my lack of knowledge. But when I got back in the gym in my late forties, hard work was not enough. I had more injuries and more ailments. I had to find a better way.

So I worked on better form and nutrition and better programming. In short, I worked smarter not harder. I had to learn to work out like I was fifty, not twenty.
And I got to my largest in lean muscle mass at 228 pounds with body fat in the low teens and I set PR’s (personal records) that put me in the “1000 pound club” at 1295 pounds in the big three lifts. (There are people now that lift more than that on 1 lift. The records for the big three are over 3000 pounds. )

Now I’m 67. But I’m still learning and still progressing every week. Will I ever lift as much as I did at 50? Nope. Then why do it? Because I feel better than I have in years. My old injuries and ailments bother me less than they did when I was 30. I have more energy, more stamina and I’m healthier overall. I haven’t had a cold in almost eight years. Will something come out of nowhere and put me down? Maybe, given my history and family history. But until then I’ll keep doing what I’m doing.

A friend and sometime workout partner (who is older than me) says he’s constantly asked by his friends why he works out as hard as he does. Mike’s answer; “Because I can”.