6 Reasons You're Not Losing Body Fat

6 REASONS YOU’RE NOT LOSING BODY FAT
This is sort of a synopsis. There will be a much more detailed series of articles soon covering each point in much more detail. Watch for it soon.

One of the biggest reasons people go to the gym is to lose body fat. But a lot of people have little or no success. It’s never easy but it’s a lot harder if you are committing these mistakes.

You would think this would be obvious but most people really don’t know how many calories they are actually eating. Even they have some idea of their calories it’s usually what we call SWAG (Scientific Wild-Ass Guess)

Even if they do come within a reasonable estimate of their calories they have no idea of their macros. The kind of calories you eat matters. You need the right combination of proteins, fats and carbs to build muscle and burn fat. If it were just a matter of burning more calories than you eat you could use all your calories on nothing but ice cream and cheese cake and lose weight. How’s that working out for you?

Studies show that even though 2 groups consume the same calories, the group that consumed more protein lost more weight.

Protein increases satiety at meals, which can make you feel less hungry. Proteins also take more calories to digest. Digestion alone makes up more than 10% of the calories you burn at rest.

3.     You Think Healthy Food is Calorie-Free

It doesn’t matter if you eat whole foods, organic, fair-trade, non-GMO food fertilized with angle poo it still has calories. If you eat too much of it you’ll still get fat. And the food companies totally understand this. Read the nutrition label- not the flashy wording on the front of the package.

If fat-loss is your goal, you have to create an extreme energy demand for your body to change. Lifting those cute little pink dumbbells that weigh less than
your I-Phone won't cut it.
. Low –intensity is a poor choice for losing fat. One hour of heavy lifting will burn more calories and more fat than a two hour low-intensity slog on a treadmill. Read this former article-The Myth of Steady-State Cardio and Fat Loss

I have watched people (we call them “Cardio Queens”) slog away on the same treadmill for 3 years now and watched them actually gain weight! 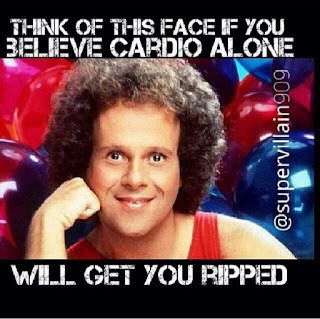 Too little sleep elevates Cortisol and decreases insulin sensitivity. Both of which wreak havoc on fat loss efforts. Get 7 to 9 hours of sleep per night.