TRAINING THE HIP ADDUCTORS
(Groin Muscles)
I would bet that 9 or 10 people I ask wouldn’t even know what hip adductors are. Yet they account for 10% or more of all injuries in some sports. So you might want to learn.

In an article back in 2004 Eric Cressey  called hip adductors “the Rodney Dangerfield of the thigh; they get no respect.” And Eric is right. They get no respect (or training time) until you go into rehab when you pull one. I’ve personally had a groin pull  in 1966 and I still have a vivid recollection of the pain.

Adduction refers to the movement of a limb toward the midline of the body. In other words, moving your knees together The adductors are made up of five muscles and account for most of the muscle mass on the inner surface of the thigh. 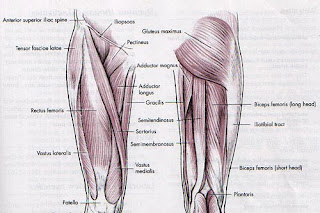 Left is the front wiew. Right is the posterior view.

A few facts about the adductors:

1.     Adductors are primarily fast-twitch fibers so your low rep hamstring exercises don’t do much for the adductors.
2.     Adductor injuries (groin strains) make up greater than 10% of all injuries in such sports such as hockey and tennis.
3.     Many of the injuries are due to an imbalance between adductor strength and abductor strength.( Abductor strength is provided by the hip and glute muscles-moving your knees apart). If adductor strength is less than 80% of abductor strength the risk of injury is 17 times higher.
4.     If you suffer from patellofemoral pain (knee pain) weak adductors are one of several potential causes.
5.     The largest muscle of the 5 adductors (the adductor magus) is second only to the largest muscle on the quads and dwarfs the size of the hamstrings. 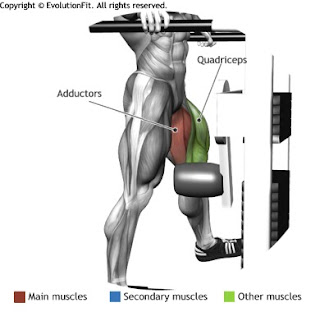 By the way, people with groin strains have 99% less sex than their uninjured teammates.

Most of the exercises for the adductors are done with a wide or split stance. There area also a number of body weight movements that can help strengthen or rehab the adductors. Go to the "Calculator/Resources at the to of the web page.

I’ve yet to find a single coach or experienced trainer who recommends the thigh adductor machine pictured below. They simply don't work.