SHOULD YOU BE TAKING CREATINE?

SHOULD YOU BE TAKING CREATINE? 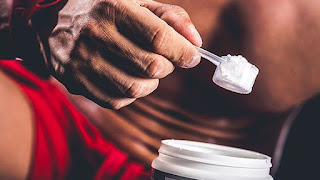 First we need to clear up what creatine is and what it is not.

Creatine is a naturally occurring substance in your body. It is similar to protein only in that is contains nitrogen. It can be obtained from the food we eat (mainly meat and fish).

Creatine is not a steroid, it is not a growth hormone (or any other type of hormone) and it has not been found to be a health risk in any way.

Creatine is the most studied supplement of all. If you do a google search you will find more than 7000 studies on creatine covering more than 40 years.

Creatine is a key player in the phosphagen energy system, the primary source of ATP (the main energy substrate in our body) during short-term, high intensity activities. Creatine functions as an energy storehouse to replenish ATP in muscles that are rapidly contracting. When your muscles run out of creatine your high intensity, short-term energy shuts down and your muscles can no longer produce force.

Studies have reported a significant increase in the quality of training, leading to 5 to 15% greater gains in strength and performance. Nearly all studies indicate an increase in mass or 1 to 2 kg in the first week of loading.

“The tremendous numbers of investigations conducted with positive results from CM (Creatine Monohydrate) supplementation lead us to conclude that Creatine is the most effective nutritional supplement available today for increasing high-intensity exercise capacity and building lean mass.”

A couple of side notes regarding the most common questions/comments I get about creatine:

·        “I don’t take creatine because it make you retain water”- True. Your muscle cells will retain more water-about .5 to 1 kg  per 100 pounds of body weight. If you weigh 200 pounds you’ll gain about 3 pounds of water STORED IN YOUR MUSCLE CELLS which will make your muscles look fuller and speed the protein synthesis process. Creatine will NOT make you fat.

·        “Creatine doesn’t work on everyone so it probably won’t work on me”-True-About 5% of the population will not get the same benefits as the other 95%. What makes you special without even trying it?

·        “Supplements are too expensive”-False-Creatine Monohydrate can cost as little as $15-$16 for 200 servings. That’s almost a year’s worth. The standard dosage is 5 g. (about 1 tsp). Read the lable and make sure you are getting a good brand. it should contain nothing but Creatine Monohydrate. By the way, pure creatine monohydrate is colorless (when disolved), odorless and tastless.