OK. I GIVE UP. LET'S TALK ABOUT GETTING BETTER ARMS
(Part 3)
The Best Bicep Isolation Exercises

From Part 1:
What you should be doing;

I covered 5 rules in Part 1 and Part 2. If you didn’t get them go back to Part 1 and read them again HERE

Assuming you followed the 5 rules mentioned above in Part 1 you’re ready to learn how to do the best isolation exercises for your biceps and do them correctly.

There are two parts (or Heads) to the biceps. Plus, we are going to work the brachialis muscle along with the bicep. The brachialis runs along the outside of the upper arm and under the bicep. Each part of the bicep serves a different function and need to be trained slightly differently. 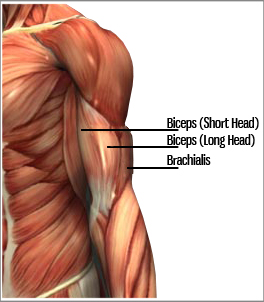 These rules are much the same as those for the triceps covered in Part 2 but they bear repeating.

1.     Don’t go too heavy. This is not a power lifting competition. Trying to train arms with loads that are too heavy will lead to several problems:
·        You’ll be forced to “cheat” which will negate a large portion of what you are trying to do. When you cheat you transfer a large portion of your effort to other muscles or several muscles resulting in not accomplishing anything at all for your efforts.
·        You will incur injury.  You are using two relatively small and unstable joints in the wrist and elbow. Both contain a lot of small muscle and bone structure. Injury to the wrist and elbow are painful and take an inordinate amount of time to heal-weeks to months.
·        You’ll look like a fool.
2.     The muscles in the arms respond best to strict form and a slow rhythmic pace.
3.     Arm muscles respond best to medium and high rep counts. (8-15 reps) and Time under Tension (TUT). Use slow eccentric, drop sets, rest pause and finisher sets (A “finisher” set is a final set using about 50% of the weight and high rep count to failure on the last set), static holds, half reps, 21’s…anything to extend the TUT. Before you even think about increasing the weight, extend the TUT. Every set should take you a minimum of 30 to 45 seconds to complete.
4.     Genetics( and old injuries) matter. “You are unique, just like everyone else”. Tailor all exercises to fit your particular bone, joint and muscle structure. If an exercise causes pain (as opposed to discomfort) try a variation. If an arm exercise causes you wrist pain all you usually need to do is vary your grip (wider or narrower) or try a different handle or apparatus. I’ll give some examples when we get into the various exercises.

The Best Exercises for Biceps

Yep, good old fashioned pull-ups. And all you have to do to hit the different heads and brachialis is to change your hand position-palms up, palms down and palms facing each other. It’s that simple. 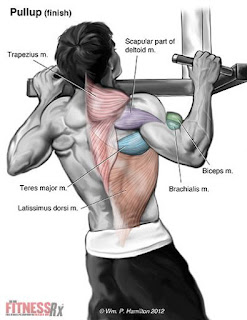 The “Long Head” of the bicep runs along the outer side of the upper arm and is best worked with movements that situate the arm behind the body.
1.    Do not lock out the elbow at the bottom. You are taking the tension off the bicep and that’s cheating. You’ll also tend to let the arm hang (resting). That’s also cheating.
2.    Do not swing the arm back to try to “get a running start” on contraction. You’re using the shoulder. Keep the motion slow and steady throughout the movement.
·       Rotate the hand slightly outward at the top emphasizing the long head

·        Don’t straighten the arms to lock out the elbow-maintain tension throughout the set.
·        Pull the handles in directly toward your ears-not toward the front or the back of your head

There is really only one movement to build the brachialis. It’s activated when the hand is in a neutral position facing toward your body. All variations are accomplished with a “Hammer Grip” (as you would hold a hammer)

The rules for doing a seated hammer curl properly are basically the same as the seated dumbbell curl except for the grip.

You may have noticed that all the exercises mentioned here are either seated or standing in a position that makes in near impossible to cheat.  That was on purpose.
The curl is the most bastardized exercise I can think of.

There are, of course, many standing alternatives. If you must stand, stand with your back against a wall or cable station so you can’t swing like some silly dance from the 1960’s.

I’m just trying to stop you from embarrassing yourself.

As always, don’t stick with these or any other exercise forever. You can find about 80 more exercises for biceps or variations in the tab at the top of the page labeled “Calculators/Resources”. When it’s time to change up the exercises look at the many variations of preacher curl or concentration curl.

How you do any exercise is more important than which exercise you do.

Let Me know what works best for you in the comments below or email me at alphaedgefitness@gmail.com