Everyone, male and female, wants a “6- pack”. Many people already have a 6-pack. The abdominal muscles are simply hidden by an excess layer of fat. On the other extreme, skinny dudes with 12 inch biceps may have a 6-pack but no one cares if skinny dudes have a 6-pack. Another group are “skinny-fat”. They appear skinny in clothes but still have a layer of subcutaneous fat (fat just under the skin) hiding their 6-pack.

What they really want is a v-taper waist with visible abdominal muscle.

V-taper is the difference in apparent width between the shoulders and the waist.

Below are old pictures of Steve "Hercules" Reeves. Remember those old Hercules movies? I used his pics because he is usually used as and example having near "perfect proportions"  based on the "golden ratio".  No one has perfect proportions but you get the idea. 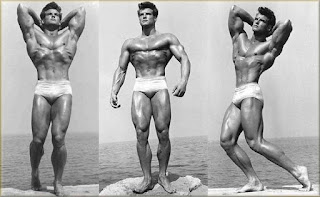 Let’s start with the visible abdominal muscle part. Abdominal muscle is, for the most part, just like any other muscle.  They can hypertrophy (grow) or atrophy (shrink).Like calves and traps they can take a lot of training because they are subjected to loads and movements most of every day. You may actually have a developed 6-pack that is simply hidden by a layer of fat.

Unfortunately, most still believe that “spot reduction” works. They think they can get a visible 6-pack by doing hundreds of crunches or other abdominal exercises.
Spot Reduction does not work. It’s a myth!

If you have defined abdominal muscles they only become visible by losing the layer of fat hiding them and that only happens by losing fat over the entire body.
Whether you are fat or “skinny-fat” the cure is the same.

“Abs begin in the kitchen” 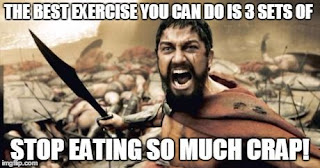 The belief that spot reduction works may lead to another problem. You may actually over develop you abdominals. You may lose the weight needed to show off your 6-pack but still end up with a “blocky” waist (a thick straight up and down appearance) with little or no taper and even some abdominal distention. This is especially common with people who perform too many “Side Bends” overdeveloping the oblique muscles located on either side of your waist.

So What Should You Do?

Hint: Lose the fat first! Until you do, you don’t know if you have any well developed abdominals to show off or if you have overdeveloped abs that make you look stocky.

1.     Focus on diet and overall strength
2.     If you do find you over developed your mid section, STOP. I’ve seen people atrophy their abs by 4 to 6 inches.
3.     If you need to development your abs,do a few sets for abs but don’t go to complete failure, don’t focus on progressive overload and don’t do them every day
4.     Do compound lifts that stabilize your core without causing over development-squats, dead lifts, pull ups (in whatever variation works best for you), prowler pulls and pushes and weighted carries.

There is one muscle related to the abdominal complex that you should continue to train. And one that almost no one actually trains anymore. Most don't even know where it is. But it's the one ab muscle that, when trained hard, won't make you look "blocky" and will make you look appreciably thinner. We'll discuss training that muscle next week.