Meet Todd. He's perfectly average in every way. He is, in fact, the average American male.

This is what the average American male age 30 to 39 looks like without his clothes.

(Courtesy of Cosmo magazine. In other words, the ladies are paying attention) 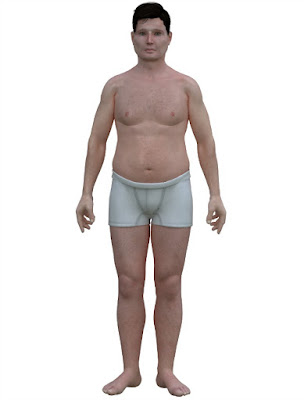 His proportions are based on averages from CDC anthropometric data. As a U.S. male age 30 to 39, his body mass index (BMI) is 29; just one shy of the medical definition of obese. At five-feet-nine-inches tall, his waist is 39 inches.

According to various surveys, the average adult male can do one pull-up. He can bench press 160 pounds once. He weighs 175 pounds and is on the chubby side. His flexed biceps measurement is 13 inches. After the age of 30, his body weight continues to go up and his lean body mass goes down. (if you are over 39 years old You are worse!)

Spend too long in average and you become "average American average" – otherwise known fat and weak.
In short, average kinda sucks. Today's average is, in fact, below average.