Should You Try Crossfit?

SHOULD YOU TRY CROSSFIT?

Crossfit has a rocky history. There are many, many fans and just as many detractors. There seems to be no middle ground. People either love it or hate it.

Crossfit is a considered a hardcore fitness protocol. Encompassing body weight, Olympic lifts, strength, speed cardio, stamina and obstacle courses. Think boot camp. If those appeal to you and you are already in good physical condition with no major health issues it will probably get you in the best shape of your life.

The problems with Crossfit arose when it first caught on and gained national attention. The problem was not so much with the protocol itself. Rather, problems arose with too few qualified coaches, trainers and facility owners. Clients were put into hard core drills from day one with no preconditioning, no physical evaluations or assessments and unqualified coaches. People got hurt.

Crossfit is now some fifteen years old and the proponents of Crossfit are catching up with proper methods of training their clients. Serious Crossfitters have learned to seek qualified instruction in the more technical aspects of the protocol. (Olympic lifts for example). Clients are being screened more carefully by most reputable crossfit coaches and trainers. There are still several parts of the protocol that many trainers would recommend against.  But as in all forms of training there are some risks especially at the elite level.

That’s not to say that all Crossfit  studios are safe and conscientious. Nor do I mean to infer that Crossfit is the only protocol that has had and still have these same issues.

The takeaway should be DO YOUR HOMEWORK. And be sure Crossfit is for you and that you feel comfortable with the facility and its coaches, trainers and the risks involved.

Personally, I think Crossfit is a definite option for those wanting to get super fit as long as they are healthy enough and capable. I also think Crossfit has reignited a lot of interest in fitness in general. And I applaud them for that. I have family members involved in Crossfit and they love it!

If you are at all interested in competing in Crossfit, check the article by Christian Thibaudeau who trains championship level Crossfiters.
https://www.t-nation.com/training/future-of-crossfit-training 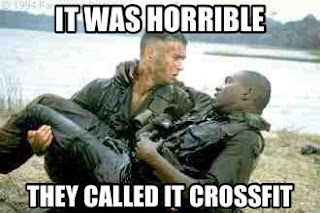 Send your comments and questions to alphaedgefitness@gmail.com

Please share with your friends using the icons below...