I’ve tried it without much success. About all I got from using it was a rash. In my opinion it’s not going to be very useful unless it comes with an expertly trained professional in the box instead of the poorly written instructions.
I’m going to let Dr. John Rusin answer. He holds advance degrees in both Exercise Science and Physical Therapy and coaches some of the world’s best power athletes, NFL and MLB athletes, Gold-Medal Olympians, competitive powerlifters and bodybuilders.-----Steve
This is a portion of an article published by T-Nation 7/8/2015 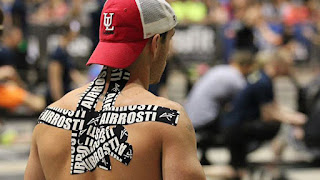 Since when has wrapping yourself up like a brightly-colored mummy become a prerequisite for being an athlete?
Though kinesiotape has been in use in the therapy industry for a while now, everything went into overdrive after the 2008 Beijing Summer Olympic Games.
You probably remember seeing the Americans kick some major ass on the beach volleyball sand, where both the men and women teams were noticeably covered in that mysterious tape.
The initial hypothesis was that the tape was administered to cover up Misty May Treanor's tramp stamp to keep relations civil with communist China. This hypothesis was quickly debunked and replaced with a statement from the American team saying that the tape was a therapeutic aid for pain and dysfunction.
But was it really? Since that time, there have been countless research articles published looking into the efficacy of kinesio tape for both pain modulation and performance enhancement.
Unfortunately, a majority of studies show that the tape is of no more help to an athlete's performance than any other faddist trend we've seen sputter through the industry.
White athletic tape has been around for almost 100 years, but too bad it didn't sport a logo. Johnson and Johnson really missed out on that mega-opportunity.
The thought is that tape can be strategically placed over the skin in areas that can either inhibit or facilitate muscular tone, thus enhancing joint positions and the production of muscular force.
There are rehab experts out there that swear K-tape is the most game-changing tool they've used for enhancing the performances of their athletes, but the chances of it working when an amateur with no experience administrates the tape is about as likely as an ice cube's chance in hell.
Do This Instead
If you're going to go down that rabbit hole just because those jacked and conditioned athletes throwing around absurd weights in the CrossFit Games are showing more Rock Tape logos than they are skin, at least do it right.
Look, there's a reason why certified practitioners and movement specialists get certified in this stuff. There's indeed a science and skill set to properly administrating a theoretically sound K-tape treatment.
Go see one of those people. They paid thousands of dollars to be certified tape specialists and may actually know what they're doing.
That said, you can tape yourself up using nothing but plain athletic tape. It's not a cure-all, but the treatment can be useful in some circumstances. 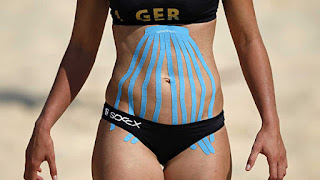 Send your questions or comments to alphaedgefitness@gmail.com